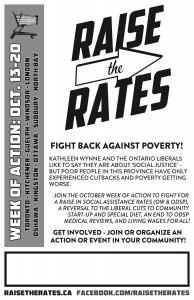 Liberal MPPs will be going back to Queen’s Park on October 20 but, during the week before, they will be in their local communities and in their constituency offices. Doubtless they will be feeling quite smug after their election win and telling people about how committed to ‘fairness’ and ‘social justice’ they are.

From October 13-17, we’ll be going to MPP’s and provincial offices throughout Ontario with our demands. The Wynne Government is going to have to understand that people in poverty are ready to fight back.