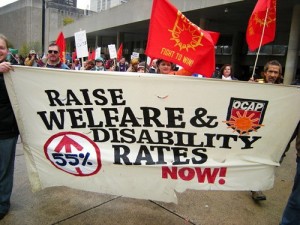 MPPs will be going back to Queen’s Park on October 20 but, during the week before, they will be in their local communities and in their constituency offices. Doubtless Liberal MPP’s will be feeling quite smug after their election win and telling people about how committed to ‘fairness’ and ‘social justice’ they are.

From October 13-20th, we’ll be going to MPP’s and provincial offices and Liberal events with our demands and holding events throughout Ontario. The Wynne Government is going to have to understand that people in poverty are fighting back.

Meal and Discussion on Raise the Rates

Join Educators for Peace and Justice

Ministry of Education, Bay and Wellsley

Poverty is an Education Issue: installation / street theatre and flyering

Join the Ontario Coalition Against Poverty

Southeast corner of Jane and Finch

Meal and Rally and March

Join OPIRG Guelph and the Raise the Rates Campaign

Panel and Discussion: Poverty in Guelph, Raise the Rates of Welfare and Disability Now!

Join the Northumberland Coalition Against Poverty

Delegation to City Council on Homelessness